Archive for category: What’s On We are taking this opportunity to get our travelling Ealing Trailfinders Supporters Association members to meet up ahead of the game.
Come and join us at the Navy Inn, Queen St, Penzance TR18 4DE from 13:00.

On Saturday Ealing Trailfinders 1871 has three teams playing at home. When three teams play at home we announce a “Club Day” which is a feast of rugby plus celebrations afterwards which include the traditional awards for “Player of the match” and “Dick of the day” for each team. Entrance and parking are free of course.

PLUS top of the table clash

15:00 Ealing Trailfinders 1871 1sts v Saracens Amateurs. The 1871s are top of their league but being pressured by three teams which have games in hand. Saracens is one of these teams so this clash should be tasty.

This coming Saturday see’s our first away ‘local derby’ match against London Scottish. We are taking this opportunity to get a number of the Ealing Trailfinders Supporters Association members to meet up ahead of the game.

If anybody fancies watching some good quality rugby tomorrow at Vallis Way. Then, Ealing Trailfinders 1871, the club’s amateur 1st team are at home to St Albans.
It’s Ealing 1871 (top of the league after conceding less that 60 points in total so far this – just like the Pro 1st XV) Versus St Albans RFC in 3rd place.
Kick off is at 3pm.
Hope to see you there

Find out more about Ealing Trailfinders 1871 Club at www.ealingrugby1871.co.uk 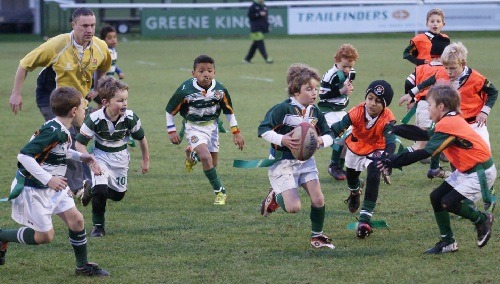 The Ealing Trailfinders Minis Rugby Festival is taking place over the weekend 26/27 November 2022 where we traditionally welcome hundreds of young players from local clubs and further afield. It has always been a busy highlight of Ealing’s rugby calendar and relies on volunteers throughout the club from helping with carparking, setting up pitches, pitch marshalling to manning the registration desk which makes it the huge success that it always is!