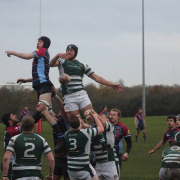 On Saturday Ealing Trailfinders 1871 has three teams playing at home. When three teams play at home we announce a “Club Day” which is a feast of rugby plus celebrations afterwards which include the traditional awards for “Player of the match” and “Dick of the day” for each team. Entrance and parking are free of course.

PLUS top of the table clash

15:00 Ealing Trailfinders 1871 1sts v Saracens Amateurs. The 1871s are top of their league but being pressured by three teams which have games in hand. Saracens is one of these teams so this clash should be tasty.

Want to join the discussion?
Feel free to contribute!

Vote for your November Player of the Month